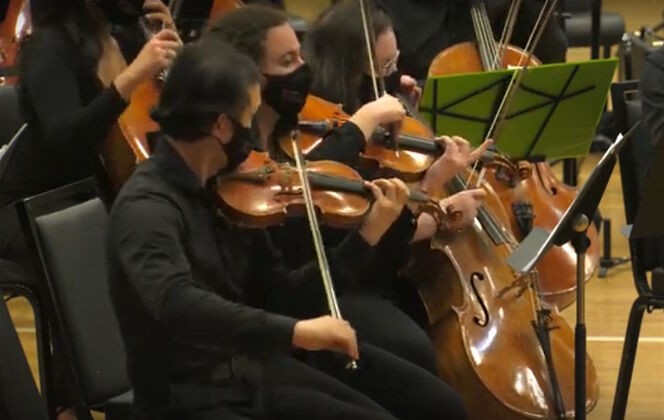 If you ever have the opportunity to hear the Los Angeles Doctors Symphony Orchestra, or attend another community-based arts performance, grab a friend and go.

That’s what almost 400 people did just before Thanksgiving, when LADSO once again graced Culver City’s Veterans Memorial Auditorium with its first post-lockdown concert, “Awakenings.” The evening featured five invigorating works and tone poems by Copland, Dukas, R. Strauss, Vaughan Williams, and Respighi. Each short piece – some rarely heard – was written for a specific section of the orchestra, highlighting brass, wind, and string instruments. The 75 musicians tackled the compositions with skillful enthusiasm and palpable heart, and it was clear that the evening was a labor of love for all involved. The audience erupted in a lengthy standing ovation at the end, witness to the long-held dreams being fulfilled in the hall that night.

LADSO’s reemergence into live performance is an occasion of note. All performing arts and artists were among the first and hardest hit starting in March of 2020, and many have yet to recover in this post-lockdown world. But artists are, by definition, creative, and so they have sought ways to be resilient in the face of such adversity. For the past 21 months, LADSO’s leaders have found productive means to maintain the cohesiveness of the orchestra and a presence within the larger community. For example, with recorded submissions, in 2020 LADSO won Best Community Orchestra and Music Director Ivan Shulman was given an Honorable Mention for Conducting in the distinguished American Prize competition. Shulman and Board President Myles Lee also donated performance recordings to community projects such as Culver City’s reimagined Online Holiday Tree Lighting (which can still be heard on the 2020 Tree Lighting YouTube video). Most importantly, Shulman kept his musicians’ spirits alive with weekly zoom seminars on various musical topics, including analyses of LADSO’s concert recordings so that members would play even better when they resumed performing. In June 2021, to help the members “have a reason to get up in the morning and keep practicing,” said Shulman, LADSO’s leadership gathered the musicians Covid-safely in the parking lot of the church where they had rehearsed pre-pandemic, in order to play Beethoven’s Symphony No. 5. “It wasn’t a concert by any means,” explained Lee, “although a few neighbors showed up, which was nice. It was really just a means of demonstrating to orchestra members that we’re still here, that we still exist as a unit. That gathering was really important for keeping us cohesive.”

LADSO’s continued existence may have also helped save the spirits and sanity of some people within another hard-hit sector, healthcare. LADSO, one of the nation’s oldest volunteer community orchestras, is populated by skilled musicians who are primarily healthcare professionals, retirees, and students, although instrumentalists from all fields are welcome. During the lockdowns, LADSO served as a much-needed sanctuary and creative outlet. “This is one of the largest orchestras we’ve had in ages,” declared Shulman. “We now have more than 75 members, many of them medical students from UCLA and USC. This increased desire to play together reflects the energy and importance of the arts in people’s lives, especially for the people in this orchestra.”

LADSO’s “Awakenings” that cold November evening felt fresh and vibrant, energizing and healing after a long slumber. It was a reawakening – reawakening to the magic of in-person performances, to the joy of live music, to dreams that had been put aside for the duration. During the boisterous post-show hubbub, when you could hear the excitement zinging through the lobby, a grateful parent of one of the musicians shared what the concert meant to him. “This is the first time I’ve seen my son play like this,” he said. “He’s a cellist and started when he was nine. My goal for him was to be able to play in an orchestra no matter where he went. To be part of a community, to share music, to meet great people.” Visibly moved, he continued: “I was just now able to tell my son, ‘You have achieved my vision for you.’ And that is thanks to groups like LADSO and leaders like Ivan and Myles.”

And that is also the gift of community-based performing arts groups – to allow the joy of artistic expression, bring inspiration to all who attend, and fulfill life-long dreams with the help of friends and neighbors.